First discovered in rat liver over 60 years ago, the cytosolic glutathione S-transferases (GSTs) are a family of dimeric enzymes that have evolved to conjugate hydrophobic and electrophilic substrates to glutathione, resulting in their inactivation and significantly increased water solubility - thus facilitating their elimination from the body.  Substrates for GSTs include a broad range of endogenous and xenobiotic substances, including byproducts of oxidative stress, carcinogens and therapeutic drugs.  The GST alpha (GSTA), mu (GSTM), pi (GSTP) and theta (GSTT) GST subfamilies have been studied most extensively to date, but additional cytosolic GST subfamilies [designated O, S, Z] have also been identified, along with GST K, which is present in mitochondria, endoplasmic reticulum, and peroxisomes. Further, GST subfamilies are comprised of multiple genes encoding active enzymes, and several genetic variants and null phenotypes have been reported.  Some GST isoforms have relatively restricted functions, e.g. GSTS functions as prostaglandin D synthase. These enzymes all catalyze the general reaction:

Some GST isoforms have relatively restricted functions, e.g. GST-S functions as prostaglandin D synthase. Historically, GSTs and other enzymes that catalyze the formation of conjugates with xenobiotics were referred to as “Class II enzymes” for which the substrate was thought to first require activation, e.g. hydroxylation, by a “class I enzyme” such as a cytochrome P450. However, it is now clear that multiple GSTs can directly form glutathione adducts of several pharmacological agents.

Significance for multiple applications
Oxford Biomedical Research now offers the most comprehensive line of commercial GST reagents, including purified recombinant GSTs and isoform-specific antibodies.   Given the wide role of GSTs in drug metabolism, including the resistance of some tumors to chemotherapeutic agents, the significant inter-individual variations in GST expression including the association of null phenotypes with cancer incidence, and the influence of diet and other factors on GST expression, these research tools can benefit many fields.  Some recent examples include the following:

Applications for drug metabolism: Using a panel of recombinant GSTs from Oxford Biomedical, Li and coworkers recently identified glutathionylation of AZD1979, a melanin-concentrating hormone receptor antagonist that is being studied for the treatment of obesity, without any prior bioactivation, to be the major mechanism of liver metabolism. Multiple cytosolic GSTs catalyze this reaction, with GSTA2-2 being the most efficient.  To determine the mechanism for the initial GSH conjugation step in the metabolism of exemestane, which is used to treat estrogen receptor positive (ER+) breast cancer patients, Teslenko et. al. employed a panel of recombinant GSTs including GSTA2, GSTA4, GSTK1, GSTM2, GSTM4, GSTO1, GSTP1, GSTZ1 and GSTT1. They found that high activity only with GSTA1, moderate activity with GSTM3 and GSTM1 and no significant conjugation by any of the other isoforms studied.

Drug Development: Zhang, et al. investigated the potential of dexmedetomidine, a well-known alpha-2 receptor antagonist, for the treatment of ischemia-reperfusion injury after hepatectomy, and employed Oxford’s GSTA immunoassay, along with other markers, to monitor liver damage. Gawryluk, et. al. employed isoform-specific antibodies from Oxford Biomedical to measure the effect of mood stabilizers of the expression of GST isoforms in the prefontal cortex of patients who had suffered from schizophrenia or bipolar disorder and reported that GSTM may be a target for these drugs. 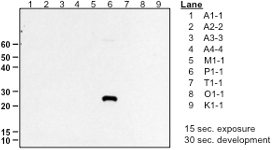 Analysis of the specificity of OBR antibodies to cytosolic GST isoforms was determined by Western Blotting against a panel of recombinant human GST isoforms (anti-P1 shown here) as well as in antigen down ELISA assays (not shown).

Toxicology: Santori, et. al. recently reported results of studies comparing the metabolism of microcystins, a large group of cyanobacterial toxins that are an emerging food safety issue. They selected a group of GSTs known to be expressed in liver (A1, A2, A4, M1, T1, T2, P1 and O1) that were obtained from Oxford Biomedical to investigate relative metabolism of microcystins as a function of structure and hydrophobicity.

Cancer Prevention: The expression of multiple GSTs, along with other enzymes that metabolize xenobiotics, are known to be regulated by the Nrf-2 transcription factor and several  foods and supplements are being investigated for their potential to reduce cancer risk. Using  Oxford’s GSTA immunoassay to monitor levels of this GST isoform in serum, Charrona et. al sought to examine the potential effect of ingestion of baby kale on the enhanced expression of members of this GST family.